Differences between stocks, Forex? What’s the best broker? What’s a good trading software? Not relevant for now, at all.
First we have to learn the foundations, the real ones. Be ready to forget most you learned till now, because it was written by people out to grab your money and it’s probably marketeer spam, not value study material. Even the most basic definitions could be different than the copy pasted “norm”.

This chapter is what markets and traders are about in a nutshell. You will probably not understand all of the following paragraphs at first. You are meant to print them and keep them handy as reference, the rest of the course will be about unfolding the following concepts. 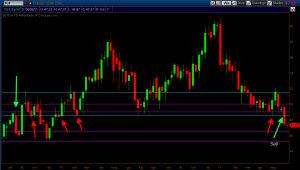 What’s a market: it’s a place where supply meets demand and feelings of fear and greed are exchanged. It may be a physical location where many traders wave hands each other or it may be completely virtual or even an advanced economy based video game like EvE, the substance does not change.
There’s nothing scientific or “hard maths” about trading, it’s all about the men and their uniqueness, their feelings.

This is scary to some, because no “AI”, no repetitive action, no scientifically reproducible sequence may be validated for more than some milliseconds.
The math heavy, so called “quantitative trading”, requires powerful data centers and even then, it does not really plan a trade. It just exploits slight markets imperfections.

It’s like flipping stuff in EvE, just performed in an handful of milliseconds.
Markets are populated by human players (and institutional bots but they won’t affect this methodology at all).
Traders ride markets supply and demand and determine where they meet. They meet at a precise point at any given time. This point is called price.
Price is the only thing that matters, it imbues the past and present, every possible event happened (even the most sudden, catastrophic and “wrong”), every sentiment.
There’s never a wrong or bad price, but only the current price. As they say, markets may keep being “wrong” / “irrational” for longer time than you may stay solvent.

Price is really pivotal, those who won’t learn to read price will always fail.

Price changes over time in a fractal (we’ll see this later) and seemingly random way.
Markets exhibit a certain amount of “noise” but there’s order in the chaos.
Contrary to uninformed beliefs, prices in markets do not play a pure Brownian Motion (random walk). Even if they did, it’d still be possible to profitably trade them by using a tecnique called Grid Trading (not covered by this course) as showcased in the book: “Bird Watching in Lion Country”.
Contrary to popular belief, that would depict traders battling in enemy trenches, sellers want to meet buyers and vice versa. To do so they leave visible visit cards, scent trails called “price levels”, even a modestly trained trader may easily spot them and just ignore the overlapped noise.

The rules above are valid in every human relation, markets are dynamically evolving human relations represented by ever changing numbers or graphs.
Human relations are expressed by people who want to relate with others, they need to leave each other ways to meet, this is why markets share this characteristic.

EvE markets are not different. Demand and offer want to meet exactly like in the most professional market in the world, the rules come from humans as well.
Markets exact behavior will be different, since EvE lacks of features such as short selling, leverage and time itself is slowed down.
The marks are still here, the principles are still valid, because we make the markets, we dictate their behaviors within the sandbox constraints. These constraints just need to be taken care of, they don’t impact how we relate each other though, the underlying mechanics are still preserved.