Nothing lasts forever, MMORPGs even less so. Even implementing an economy as described above is not going to safeguard a game forever. Sooner or later the markets win and overcome any protection, any segregation. Here’s a non technical description of the process:

1) Markets (economy comes with them) exist to allow for or facilitate an exchange of goods between parties (individuals being a party consisting of 1 member).

2) Markets by their own nature are: self optimizing over time, self healing and self similar across time frames (in a fractal way).

Let’s dissect “self optimizing over time”:

– self optimizing: this means a market either reduces price spreads (with rare cases of spread staying constant) or it fails to, and its participants leave it and it dies. We want it to succeed, because a MMO where participants leave its markets to die is a MMO that itself is doomed to die.

– over time: this means the process may take from a fraction of second (real life markets at low time frames) to years.


Therefore it’s just in the nature of the markets to defeat the purpose of keeping money and wealth as slow and segregated as possible: it’s a natural, gradual phenomenon that is not going to change the outcome.

Like it or not, fight against it or not, the outcome SHALL be: the markets will indeed self optimize and the trade hubs / cities shall see one of them slowly prevail and attract traffic, liquidity and wealth. Slowly at first, then, like a black hole, the process shall speed up till we get to a singularity, that is THE ONE trade hub.
When the game physically prevents one market to take all the items (in example: The Elder Scrolls Online only allow 30 items to be posted on a given guild store), the black hole effect converges on a third party “global listing” website or add on.

So, why going through all the “segregation” stuff I described above when the outcome is certain?

Because if we start with an excellent separation of goods, if we cause the maximum “money friction” we can, then the outcome will be greatly slowed down.
Start with a perfect “one trade hub” with central market and you’ll have your MMO economy rush to its unavoidable “MMO coma status” outcome within 6 months.

Put in place the various friction measures I have listed above and it shall take a couple of years. Plenty enough for the MMO to enter and live its “golden age”. Having a golden age is what makes an old, tired MMO still be around after 10 years so that both existing and new players may still enjoy playing it.
MMOs that did not have a golden age, more or less died fast or lived bad and crippled for their whole existence.

EvE Online had all those friction and segregation mechanics in place, however it still degenerated into “Jita = one stop shop market” after some years.
Why? Because markets mechanics are some of the strongest that men may experience. They tend to adapt (self optimize) and overcome the thoughest obstacles.

Markets are the sum of countless human releations and humans live to self optimize and self heal (as a whole). Exactly the same properties of their markets byproducts.

Markets (= the collective of players participating to them) strong armed the EvE Online safeguards.
Therefore segregation was defeated by players creating (close to) real time third party websites aggregating the separated regions and items under one central, easy to read information source.
In the beginning it was EvE Central, then more and more “real time” other services and websites made price discovery easier and quicker than ever. Therefore EvE friction and markets control mechanics got bypassed and defeated. Today, even if Jita would explode, players would still find aggregated prices as quickly and as easily, the web is the new, global trade hub. 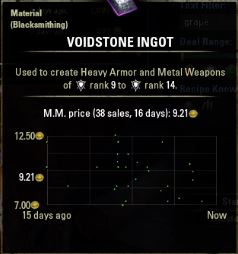 We are now seeing a somewhat similar phenomenon slowly coming to The Elder Scrolls Online. The game had born with as much separated markets as possible. However the markets are tirelessy grinding at that design. There have been the first attempts at creating “central hub markets information” websites, a process very similar to the above described EvE Central. These days we may see powerful third party game add ons providing median averaged prices taken across multiple markets: wherever you go and browse a guild store, the add on stores, aggregates and prepares statistics on what was available and its price. The add on now even creates some very basic charts!

I hope this necessarily “short” article has stimulated your curiosity into the fascinating world that sits behind the games you play. A world where a constant fight between the markets ever self-optimizing nature is contrasted by developers who try and extend their MMORPG lifetime as much as possible.