Insurer, along with auditor, is one of the least common EvE® Online meta professions. For a brief background about EvE meta professions please look here. Insurance, in the context of this web site, is not the basic EvE ships insurance but a financial instrument born to insure all sorts of more or less risky activities in EvE, including trading, BPO transporting and so on.

Insurance has a lower entry barrier than auditing, but it still requires: 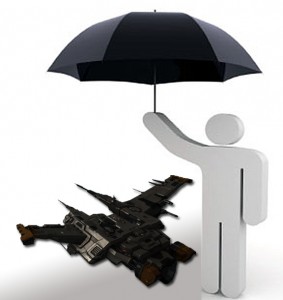 Insurance is a contract (policy) in which an individual or entity receives financial protection or reimbursement against losses from an insurance company. An EvE insurance policy applies to EvE assets, securities and stock.

What is an EvE insurance company?

It’s also worth noting how EvE non-ship insurance companies are more similar to a specialist business like LLoyd’s of London™ than the classic “standard car insurance for everyone”. Their contracts are created and customized around a specific deal, transaction, business or investment.

The most common transactions involving an insurance policy are:

Due to the specialty nature of EvE insurance contracts, EvE insurance companies cannot rely on wide spectrum statistics like real life companies do. Appraising is the act of estimating the quality, amount, size, and other features of a subject. In EvE’s context the subject is the item, asset, security to insure. Appraising is relatively easy when the collateral consists of items like BPOs (in high sec they usually sell at least for close to NPC price, even in case of firesale) but becomes hard and risky in case of speculative, volatile and / or low volume market items.

Follows an example about how Vaerah Vahrokha appraises depreciable items to be used as collateral.

A player wanted to get a 3B loan (he called it “a bond”). He created a thread on Market Discussion stating how his loan was fully collateralized and disclosed the collateral: Tornadoes and an Obelisk. Here is the appraising process that was made about the Obelisk, to figure out at that time it’d not be worth as much as claimed (1.6B) but about 1.4B.

The following is a typical suggested sequence of tasks to perform in order to complete a transaction by using a Third Party Service. Please notice how the sequence may take vast modifications depending on the exact transaction kind and on the possibility for some of those transactions to happen between two actors and not three.

Here is a list of the most known Third Party Services. It’s in alphabetical order so not to hurt anyone’s sensibility. Notice how some of them may be currently inactive. There are recurring threads about those Services listing their names as well.