While having a somewhat lower entry barrier than auditing, these meta professions still require complete trust by all the involved parties. Sometimes  the assets values involved in the transactions may reach 100 billion ISK.
In a game like EvE, where unchecked and consequence-less scamming and stealing are considered foundation gameplay features, this means one sure thing: only few individuals will be more or less universally trusted enough to find wanting Clients. Even less will stand out and stick around for years.

What is a Third Party Service? 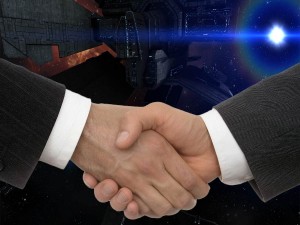 The Third Party guarantees that the transaction between the two other parties will be smooth and secure. There are usually pre arranged plans to engage in case something goes wrong. The Third Party Service cannot afford any smear on his / her reputation, else their EvE career in this niche specialty is over. This is expecially bad, because it literally takes years to earn the amount of trust needed to be accepted in this profession.

There are several variations of this service and several kind of assets that may be involved.

The most common transactions involving a Third Party Service are:

The following is a typical suggested sequence of tasks to perform in order to complete a transaction by using a Third Party Service. Please notice how the sequence may take vast modifications depending on the exact transaction kind and on the possibility for some of those transactions to happen between two actors and not three.

Super Capital ships have a number of unique features and challenges that make them different to act as a middle man for. Notable challenges are the inability to fly in high security systems and to dock to a station. Super Capital ship transactions are usually kept well private, posting about them on the forums is not needed nor desired. Here is a basic workflow that may be followed in most situations:

Here is a list of the most known Third Party Services. It’s in alphabetical order so not to hurt anyone’s sensibility. Notice how some of them may be currently inactive. There are recurring threads about those Services listing their names as well.

1 (OHLC)
Open, High, Low, Close (and sometimes Volume) data, is a finance industry standards format used to represent price evolution during a certain period of time (daily, weekly, hourly...). OHLC data are consumed by financial analysis applications and by charting software to represent price action.
audit
The general definition of an audit is an evaluation of a person, organization, system, process, enterprise, project or product.
1 (audit)
The general definition of an audit is an evaluation of a person, organization, system, process, enterprise, project or product.
1 (Meta game)
Meta gaming is a broad term usually used to define any strategy, action or method used in a game which transcends a prescribed ruleset, uses external factors to affect the game, or goes beyond the supposed limits or environment set by the game. Another definition refers to the game universe outside of the game itself.
1 (emergent)
Emergent gameplay refers to complex situations in video games, board games, or table top role-playing games that emerge from the interaction of relatively simple game mechanics.
1 (sandbox)
A sandbox game is a type of video game design where a player can roam freely through a virtual world and is given considerable freedom in choosing how or when to approach objectives. Sandbox emphasises a paradigm where, as in a physical sandbox, the user is entertained by his ability to do as they wish creatively and with there being "no right way" of playing the game
1 (discretionary)
A discretionary method is a trading method where little or no mechanical tools and procedures are used to decide the trades. A discretionary trader applies a solid ruleset basing on a flexible interpretation of the market
1 (PLEX)
A Pilot License Extension (PLEX) is an item that adds 30 days of game time to an EvE Online account. It is freely traded like any other in game item. CCP accepts to convert in game PLEXES to real money in case disasters and emergencies happen.
1 (NEISIN)
A New Eden Interstellar Securities Identification Number (NEISIN) uniquely identifies a security. While its structure is identical and strictly compliant with "real life" ISINs, NEISINs are tailored to New Eden investments and contracts.